Adulteration of Food and Drink in Victorian England


It’s a warm summer’s day in London in the latter years of Victoria’s reign, the temperature is climbing and the streets are crowded with the hustle and bustle that we know characterizes the great metropolis. We are in Shoreditch or Seven Dials or any one of the great city’s numerous poorer districts. It is time for an Ice or an Ice-Cream. 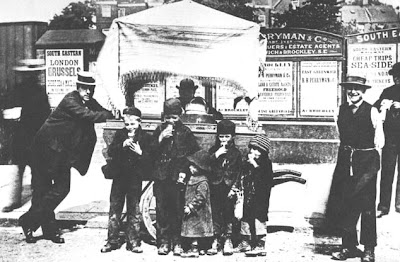 It was only at mid-century that the Ice and Ice-Cream sellers began to make their presence felt, but now in the 1880s, they are everywhere. The Ice-Cream or Hokey-Pokey man, like the ubiquitous organ-grinder, is likely to be Italian and from Saffron Hill in the London Borough of Camden. In the middle of the century Saffron Hill was a squalid slum overrun by paupers and thieves. It was there that the Artful Dodger took Oliver for it was at Saffron Hill that Fagin had his den; a “dirty and more wretched place” than the boy had ever seen. “The street was very narrow and muddy, and the air was impregnated with filthy odours.” Even clergymen visiting the area had to be accompanied by plainclothes policemen.

In 1877, Thomson and Smith, writing about Street Life in London described the

... little villainous-looking and dirty shops [in which] an enormous business is transacted in the sale of milk for the manufacture of halfpenny ices. This trade commences at about four in the morning. The men in varied and extraordinary déshabille pour into the streets, throng the milk-shops, drag their barrows out, and begin to mix and freeze the ices.

Even the frozen water-ices which should have consisted of nothing but water and a bit of flavouring were adulterated. The colouring was artificial, it contained none of the fruit from which it was allegedly made and as Thomson and Smith went on to point out, it was "a very questionable article, and the less consumed the better the consumer will find himself."

It was the cream ice, as it was called, that had the greatest appeal. Properly made it included milk and eggs and, therefore, the cost of production, especially when it was made with care and with good ingredients, was higher than the cost of producing Ices, the profits could be considerable. And these profits could be extended by mixing water ices with the cream ices and using milk which was frequently adulterated.

Not only was milk commonly adulterated, it was often unclean. Coming as it did from cowsheds in London and from the surrounding countryside; it “proved," in the eyes of Charles Dickens Jr, "often the source of, or rather, perhaps, the means of spreading, serious epidemics of typhoid, diphtheria, and scarlatina.” It may, indeed, have been safer to use the adulterated milk which was usually just water and chalk, than the real thing. Mr Punch aptly described the product as a “wishy-washy triumph of art over nature ... milk from the pump and chalk-pit, without ever having been possessed of a cow.”

All through the Victorian era food was adulterated. It was, put simply, a fact of life. Almost anything you purchased was likely to have had something added. Two reasons for such practices are readily apparent. First, food might be adulterated to make it more appealing. This is a practice which is still employed with the use of food colourings and special lights over meat displays in order to give the meat a richer, redder look. The second reason was to dilute the product in order to increase the profit margin. Adding water to milk is probably the most common instance of this although adulteration was far more widely practiced in terms of the range of foods available to Victorians. Often the two practices merged. James Greenwood, in his 1869 book, The Seven Curses of London, makes a telling point.

We are constantly reminded that “competition is the soul of trade,” but we should be loath to think that such were the fact if the term “competition” is to be regarded as synonymous with adulteration, or, in plain language, robbery.

More than a decade earlier, in his testimony before a Parliamentary committee, the Select Committee to inquire into the Adulteration of Food, Drinks and Drugs, Arthur Hill Hassall pointed out that the practice “prevails in nearly all articles which it is worth while to adulterate, whether it is food, drink or drugs.” and he went on to point out that

Among the items adulterated and the adulterants used were alum, added to flour in the production of white bread; sloe, ash and elder leaves used to adulterate tea; peas and beans in ground coffee; alum to brighten wine; Brazil wood to colour Port; and sawdust and filbert husks to make red wine more astringent. Just how widespread was the adulteration of food and drink? Certainly it varied from area to area, but it is likely that it was as great or greater in London than in any other part of the British Isles. Writing at the very beginning of the Victorian Era, Theodore Sedgwick commented that it was “difficult to mention a single article of food that is not adulterated.” Some items, he noted, could hardly be found in their genuine state. Even medicines were adulterated and the “quantity of medical preparations thus injured is said to exceed belief.”

Although a string of acts were passed in the second half of the century, it was not until the 1875 Sale of Food and Drugs Act with its definition of an adulterated product as one which endangered the health of the consumer or one by which the customer was deceived through misrepresentation of the goods, that this process which did so much damage to the health of the British public was gradually brought under control.