Victorian funerals were big business. Indeed, there were funerals pitched at all levels of society. At their most elaborate, they could bring even the great metropolis to a standstill. When the Queen's Consort, Prince Albert, died, the whole of the realm went into mourning. Not only were church bells tolled throughout the land, many churches held special services and shops in many towns were closed. When the Duke of Wellington died, more than 65,000 people came to see him lying in state. On the day of the funeral itself, the bells in the Tower Hamlets were tolling at minute intervals throughout the day and, according to The Times, ninety percent of shops were completely closed and the remainder partially so.

That the funeral business was an excellent trade can hardly be doubted. One writer in Leisure Hour in 1862 describes the business as extortionate.

In numberless instances the interment of the dead is in the hands of miscreants, whom it is almost flattery to compare to the vulture, or the foulest carrion bird. . . the morality is, in their hands, to use a plain word, robbery.

The bereaved were often led into spending more than was either necessary or desirable and paying inflated prices for no purpose other than to increase the profits of those in the industry. But not everyone profited from a funeral. When a funeral became a major event, it had ramifications for tradesmen as well. A linen-draper, writing to The Times (4 June 1830), noted that when King George IV took ill, his very successful trade in "coloured silks, prints, ribands, and every kind of fancy and coloured goods" had stopped and he went on to say that "all my hopes are blighted." Three weeks later, the King died and a period of general mourning was declared which lasted 45 days. When the period of general mourning was brought to a close, on 11 August, it was "evidently . . . dictated by a considerate regard to the injury which the manufacturers . . . sustained by the event." Again, on the death of the Duke of Wellington letters appeared in The Times (24 September 1852) pointing out the impact a period of mourning would have on trade, and with the death of Queen Victoria, the Secretary to the Drapers' Chamber of Trade, wrote to The Times (26 January 1901) to suggest that the twelve months of Court Mourning would profoundly impact on the retail drapery trade which ordered their products three or four months in advance. He went on to suggest that the Earl Marshall fix a shorter period for public mourning; suggesting three months.

While great funerals were, of course, the exception, there seems to have been a funeral available for everyone as evidenced in a mid-century advertisement in The Times that offered six classes of funerals ranging in price from 21 pounds for a first-class burial down to 3 pounds, five shillings for the sixth class. Even these prices could be reduced further "by dispensing with the funeral cortege through the streets of London." Instead, the Necropolis Company suggested that the body be taken by special train from their private station to Woking Cemetery "to relieve the public from unnecessary and costly display."

If one was attending a funeral one needed to dress accordingly. There were outfitters prepared to provide appropriate clothing and other elements to the discerning mourner. The London General Mourning Warehouse located at 247 and 249 Regent street advertised in The Times (1 November 1845) that "millinery, dresses, cloaks, shawls, mantles, &c., of the best quality can be purchased at the most reasonable prices." Business must have been good, for by the 1870s it had taken over properties on either side and was now advertised at 245-251 Regent Street from where it offered, in The Illustrated London News (11 January 1873), "a Black Dress made up complete, sufficient Print for a Dress, also a Bonnet, Mantle or Shawl and Gloves, for 3gs." In addition to such large firms, there were many smaller ones and even those that specialized in particular articles of clothing. The Misses Lewis, for

example, advertised as "mourning milliners" in the late 1840s.

Not only was the family expected to mourn (and to dress appropriately), the family's servants might be required to wear mourning clothing. Peter Robinson's at 256 to 262 Regent Street advertised "Mourning for servants at unexceptionably low rates, at a great saving to large or small families." Both Peter Robinson's and Jay's (also in Regent Street)offered to conduct funerals, in London or in the country although it is likely that they acted as middle-men, arranging for an undertaker to actually do the funeral while taking a profit for themselves.

By the middle of the century, funerals had become such big business that Mr Punch was drawn to comment on it. Referring to advertisements to perform funerals, he commented that there must be "different qualities of grief ... according to the price you pay."

For £2 10s., the regard is very small. For £5, the sighs are deep and audible. For £7 10s. the woe is profound, only properly controlled; but for £10, the despair bursts through all restraint, and the mourners water the ground, no doubt, with their tears.

Charles Manby Smith, writing in Curiosities of London Life (1853) had little to say that was favourable to the industries that provided for funerals.

Here, when you enter his gloomy penetralia, and invoke his services, the sable-clad and cadaverous- featured shopman asks you, in a sepulchral voice-we are not writing romance, but simple fact - whether you are to be suited for inextinguishable sorrow, or for mere passing grief; and if you are at all in doubt upon the subject, he can solve the problem for you, if you lend him your confidence for the occasion. . . .Messrs. Moan and Groan know well enough, that when the heart is burdened with sorrow, considerations of economy are likely to be banished from the mind as out of place, and disrespectful to the memory of the departed; and, therefore, they do not affront their sorrowing patrons with the sublunary details of pounds, shillings, and pence. ... For such benefactors to womankind - the dears - of course no reward can be too great; and, therefore, Messrs. Moan and Groan, strong in their modest sense of merit, make no parade of prices. They offer you all that in circumstances of mourning you can possibly want; they scorn to do you the disgrace of imagining that you would drive a bargain on the very brink of the grave; and you are of course obliged to them for the delicacy of their reserve on so commonplace a subject, and you pay their bill in decorous disregard of the amount. It is true, that certain envious rivals have compared them to birds of prey, scenting mortality from afar, and hovering like vultures on the trail of death, in order to profit by his dart; but such "caparisons," as Mrs. Malaprop says, "are odorous," and we will have nothing to do with them.

Although expected to mourn, women were generally advised against attending funerals, especially for those nearest and dearest to them. Cassell's Household Guide for 1878 discourages the practice pointing out that it is something done by female relatives in the poorer classes. It may also have been the case that the frequent practice of drinking both before and after the funeral not only by the funeral party, but by the undertaker and his assistants would have been upsetting. An article in Leisure Hour (1862) quotes the secretary of an English burial society that

Undertakers' men, . . . usually take whatever drink is given them, and are frequently unfit to perform their duty, and have reeled in carrying the coffin. The men who stand as mutes at the door are supposed to require most drink. I have seen these men reel about the road, and after the burial, we have been obliged to put these mutes and their staves into the interior of the hearse and drive them home, as they were incapapble of walking.

Aside from the clothes that were so much a part of mourning there were all the little things that had to be done and the appropriate appurtenances ranging from mourning envelopes and paper and black sealing wax to mourning jewellery. The selection of items was extensive. In a period when correspondence was far more formal than today, Parkins and Gotto, stationary manufactures of Oxford Street, advertised "50 different kinds of mourning stationary" and for those who wanted their mourning stationary to carry the appropriate monogram, there was always the service provided by firms such as Henry Rodrigues at 42, Piccadilly which offered:

Black bordered note paper and envelopes of every description, also ... paper every width of border. Memorial Cards and return Thanks of the newest patterns. Notepaper and envelopes stamped in black relief, and illuminated in a superior manner.

In addition there were the personal momentos of the deceased. In a period when death was likely to take people at a younger age and the body was kept in the home until the funeral, momentos provided a kind of therapy and a physical remembrance. It was a time before the widespread popularity of photography meant that one could go to one's photo album and see pictures from happier days and so rings, brooches and lockets containing hair from the dead were often kept by the immediate family and sometimes even by particularly close friends. 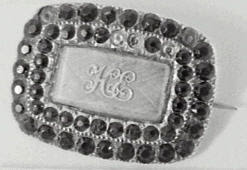 A Victorian Mourning Brooch with Hair
For those who could afford it the one picture of the loved one might be a post-mortem photograph taken and kept as a momento.

The mourning process was rigidly governed by convention. Clocks in the house were stopped at the time of death and mirrors were either draped or turned to the wall. Curtains were drawn. The length of time for mourning appropriate for a widow or widower, a child or a parent was clearly spelt out. Deep mourning, for example, for a widow might be two years, followed by a period of half-mourning. Within these times codes of dress, especially for women were quite detailed as were what was and was not appropriate activity. Men, because they still had to carry on the business of the day, were less bound by convention, but even they had to adhere to the appropriate dress and behaviour expected from them for their place in the family. Such patterns were followed by those in the "better" classes. Death in the lower and labouring classes was less bound up with the rituals. This, of course, was seen by the middle-classes as evidence for shallowness in feeling and a general lack of respectability.

By the later years of the century, the pattern and habits of mourning had begun to change. Cremation was more widely accepted and as Richard Davey noted in 1889, men no longer wore "full black for a fixed number of months after the decease of a near relation, and even content themselves with a black hat-band and dark-coloured garments." The funeral ceremony was 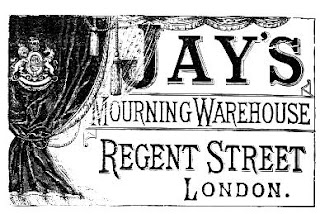 becoming less elaborate and it was much more common to send flowers to the grave than in earlier years. This must have been a problem to the vast mourning industry which surely would have wanted to keep the whole process as complicated as possible. The mourning warehouses which had expanded from clothing to paraphernalia to funerals were, by the 1890s, advertising their knowledge of the appropriate behaviour for mourners. In a full column advertisement in The Times in 1894, Jay's Mourning House pointed out that

The etiquette of Mourning is continually changing in certain matters of detail, and a reliable guide to what may, and what may not, be worn under certain circumstances is almost necessary. That guide is to be found here--an authority on everything, from the length of a widow's veil to the texture of a ball dress.