We tend to think of our generation as being one of “fast food” people, but the reality is not that we eat fast food (which, of course, we do) but that we are fed by fast food chains.  The Victorians were “fast food” consumers, but what they ate came largely from individual purveyors on the streets of London and the other large cities.

Food and drink was readily available at all hours of the day and night, purchased from individual entrepreneurs. Henry Mayhew, in the middle years of the nineteenth century, listed “The Street-sellers of Eatables and Drinkables”  and included, in his list, 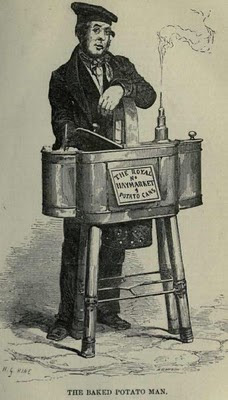 In addition, one might find “sherbet, and some highly-coloured beverages which have no specific name, but are introduced to the public as 'cooling' drinks …”

Men, women and children, especially those working the long hours common among the labouring classes, might take all of their meals in the streets.  The primitive and overcrowded conditions under which so many city dwellers were forced to live during the Victorian Era meant that for most there was no facility available for cooking meals. Street food was varied, cheap and tasty, if not nutritious and, at times full of dangerous additives or fouled by human or animal excrement.

The variety of what was available was extensive and, as Henry Mayhew tells us,

The coffee-stall supplies a warm breakfast; shell-fish of many kinds tempt to a luncheon; hot-eels or pea-soup, flanked by a potato 'all hot,' serve for a dinner; and cakes and tarts, or nuts and oranges, with many varieties of pastry, confectionery, and fruit, woo to indulgence in a dessert; while for supper there is a sandwich, a meat pudding, or a 'trotter.'

In the middle years of the century, there were literally thousands of street sellers of food and drink.  Mayhew estimated that there were 500 sellers of Pea-Soup and Hot Eels, alone and 300 sellers of Fried Fish.  Prices were such that all but the very poorest might eat.  For example, a half-penny  serve of hot eels might consist of 5 to 7 small pieces with ¾ of a cup of liquid while for the  same price, one might have a pint of pea soup.

Street sellers of food and drink provided refreshment, too, for those who were looking to buy the variety of other goods available at the kerbside.  There one might find the vendor of matches, farthing windmills, flowers, shirt-studs, animals, fruit, vegetables, paper flags and all the needs of the poor resident in a large metropolis. Not only were there goods to be bought to separate the consumer from his or her shillings and pence, there were games to be played and all sorts of amusements.  George Sims, writing at the end of the Victorian era, commented that “ the weighing chair, the shooting gallery, and the try-your-strength machine are to be found by the pavement's edge.”

One of the most popular dishes sold on the streets was jellied eel or, as it was sometimes called, eel jelly.  Cheap and nutritious it was a staple in the diet of the Victorian poor.  The eels were chopped and boiled in fish stock with various herbs and spices.  Their naturally gelatinous texture set the stock and they were ready to be marketed. For those who have never tasted them, the flavour is similar to rollmops.

Here in all its glory the ell-jelly trade is carried on.  In great white basins you see a savoury mess.  Behind the stall mother and father, sometimes assisted by son and daughter, wash up cups and spoons, and ladle out the local luxury to a continuous stream of customers.  Many a time on a terribly cold night have I watched a shivering, emaciated-looking man eagerly consuming his cup of eel-jelly, and only parting with the spoon and crockery when even the tongue of a dog could not have extracted another drop from either.

For those who were either up late or rose early there were the coffee stalls.  Some opened as early as midnight, while others did not start trading until three or four in the morning.  The former appealed to "'night-walkers'" - fast gentlemen and loose girls" while those that opened in the morning were more likely to be patronized by working men. 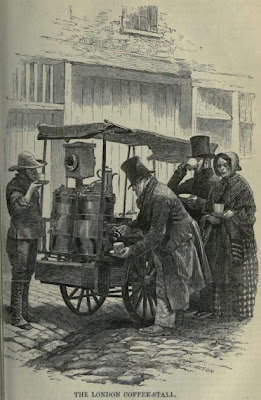 They usually sell coffee and tea, and some of them cocoa. They keep hot milk in one of the large cans, and coffee, tea, or cocoa in the others. They supply bread and butter, or currant cake, in slices - ham sandwiches, water-cresses, and boiled eggs. The price they charge is ld. per mug, or ½d. per half-mug, for the coffee, tea, or cocoa; and ½d. a slice the bread and butter or cake. The ham sandwiches are 2d. each, the boiled eggs ld., and the water-cresses a halfpenny a bunch.

The street vendors of food and drink continued to be a common sight in London until the end of the Victorian Era; and for good reason.  If they served as a kind of outdoor café for the poorest of the poor, they served a significant portion of London's population.  As late as 1889, Booth estimated that 30 percent of Londoners lived in poverty and to this must be added the more casual users of the street vendors; children seeking ice-creams, after-theatre crowds gathering around a coffee vendor and those who simply found it more convenient than going to a restaurant or café.

While street vending  remained, for the individual purveyor, a precarious trade, for Londoners it was a popular and importaint institution.
Posted by Dr Bruce Rosen at Friday, April 30, 2010

Most intriguing! I miss jellied eel.

So basically this could be simplified to "London used to be a lot more like Mexico City" :P

Perfect timing, I've challenged the local steampunkers to bring Steampunk street food to our picnic in June. Just the thing to link to for suggestions, thanks.

This makes me want to try the eels!

Thank you! Smashing Idea, lovely. I really like this article. Finally, I get an image of victorian street food! I'll be eating street ices and jellied eels soon! THANKS!

Thankyou so much for this info! As well as just bringing Victorian street life wonderfully alive and reminding me of what I've seen on the telly of street food vendors in India etc, it has also helped me in trying to locate the relevant stalls for our Victorian Christmas Market so that hopefully we can justify the description 'Victorian' in more than a black top hat and a few petticoats and mop hats! I now need to find the stall holders of such morsels and near to me in Derbyshire too!!