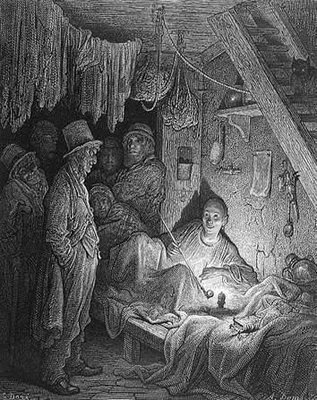 An East End Opium Den, 1870
For many, images of the darker side of Victorian London are shaped by the descriptions of writers like Henry Mayhew in the middle decades of the century, or by Blanchard Jerrold and Gustave Doré, and James Greenwood a few decades later. In addition to their often sensational images there are the descriptions we derive from the fiction of the times. Thus, our image of Victorian London's drug culture, if indeed such a culture existed, is composed in part of sensational journalism and in part of sensational fiction.

Among the writers of fiction who concerned themselves with the use of opium and the opium dens that were supposed to be a part of the darker side of the great Metropolis, particularly in the years of Victoria's reign, were Oscar Wilde, Charles Dickens and Sir Arthur Conan Doyle. The question we are faced with is whether the descriptions are an accurate portrayal or overdrawn and sensationalized accounts.

One of the best known scenes involving the taking of recreational drugs is found in Sir Arthur Conan Doyle's tale, The Sign of the Four.

Sherlock Holmes took his bottle from the corner of the mantel-piece and his hypodermic syringe from its neat morocco case. With his long, white, nervous fingers he adjusted the delicate needle, and rolled back his left shirt-cuff. For some little time his eyes rested thoughtfully upon the sinewy forearm and wrist all dotted and scarred with innumerable puncture-marks. Finally he thrust the sharp point home, pressed down the tiny piston, and sank back into the velvet-lined arm-chair with a long sigh of satisfaction.

It was this performance that Dr Watson had been witnessing "three times a day for many months;" a performance he found both disturbing and dangerous.

There are two primary images one is left with when considering the use of opium or its derivatives, the most common of which, in the nineteenth century was laudanum, a tincture of opium widely used as a painkiller. On the one hand, we have the image of its use amongst artists and writers, including both Coleridge and DeQuincy in the early years of the century. Later, Wilkie Collins was a regular "drinker" of laudanum for the pain of gout and other maladies. Among other Victorians using laudanum were Elizabeth Barrett Browning and Charles Dickens. Elizabeth Siddal, Dante Gabriel Rossetti's wife, died as a result of an overdose of laudanum and Rossetti himself was to follow her to the grave, in all probability as a result of his own overuse of laudanum and opium.

The second image is that of something resembling a widespread network of opium dens throughout the United Kingdom, spreading like tentacles from its centre in London. Such an image is a gross exaggeration. While there were opium dens in London and in all probability in most of the port cities of the United Kingdom, they were few and far between. In most cases they catered to the habits of seamen addicted to the drug and there is no evidence of any "network" of opium dens.

The image painted in the newspapers is not a pleasant one. Nor is that protrayed by novelists. The "pipe dream" with which The Mystery of Edwin Drood opens is singularly upsetting to the reader as is the whole scene in the opium den. The Picture of Dorian Gray, too, is laced with references to opium and interludes in low dens where opium smokers may go to find oblivion. Sir Arthur Conan Doyle, like Charles Dickens, has placed the drug scene in The Man with the Twisted Lip in a dockland setting and has peopled the opium den with seamen, mostly Chinese and Lascars or East Indian sailors. The den is in Upper Swandam Lane,

a vile alley lurking behind the high wharves which line the north side of the river to the east of London Bridge. Between a slop-shop and a gin-shop, approached by a steep flight of steps leading down to a black gap like the mouth of a cave, I found the den of which I was in search. ... I passed down the steps, worn hollow in the centre by the ceaseless tred of drunken feet; and by the light of a flickering oil-lamp above the door I found the latch and made my way into a long low room, thick and heavy with the brown opium smoke, and terraced with wooden berths, like the forecastle of an emigrant ship.

Through the gloom one could dimly catch a glimpse of bodies lying in strange fantastic poses, bowed shoulders, bent knees, heads thrown back, and chins pointing upward, with here and there a dark, lack-lustre eye turned upon the newcomer. Out of the black shadows there glimmered little red circles of light, now bright, now faint, as the burning poison waxed or waned in the bowls of the metal pipes. The most lay silent, but some muttered to themselves, and others talked together in a strange, low, monotonous voice, their conversation coming in gushes, and then suddenly tailing off into silence, each mumbling out his own thoughts and paying little heed to the words of his neighbour. ... As I entered, a sallow Malay attendant had hurried up with a pipe for me and a supply of the drug, beckoning me to an empty berth.

Such descriptions are no more sensational than those that appeared in the newspapers and journals of the day. An article in the French journal Figaro, reprinted in the Pall Mal Gazette, in 1868, puports to describe an opium den, in Whitechapel. It is a "wretched hole,"

... so low that we are unable to stand upright. Lying pell-mell on a mattress placed on the ground are Chinamen, Lascars, and a few English blackguards who have imbibed a taste for opium.

While opium dens may have been a staple of a certain type of Victorian fiction, the more common reality was that amongst Victorians the most frequent use of opiates was in the form of pharmaceuticals. There is no question that during most of the Queen's reign opium and its derivatives was readily available over the counter from local chemists, usually in the form of laudanum. Numerous household remedies contained opium in one of its forms including many used with children. Among the best known of these was Godfrey's Cordial which was commonly adminstered to children and infants as a sleeping draught. Karl Marx, in Das Capital, commented on this when he wrote of "disguised infanticide and stupefaction of children with opiates," and he went on to claim that

In the agricultural as well as the factory districts of England the consumption of opium among adult workers, both male and female, is extending daily.

Anthony Wohl, in Endangered Lives: public Health in Vicorian Britain, has pointed to the Fens where "poppy tea" was widely drunk and used for general medicinal purposes with a consequent wasting in children and possibly malnutrition leading to death.

Another popular medication was Dover's Powder which, like many others, was used in the treatment of a wide variety of complaints including gout, headache, syphilis and malaria. It is likely that the sense of well-being brought on as a result of the opiate was frequently mistaken by patient and doctor alike as a cure. Despite the popularity of such medications, and the ease with which they could be purchased, not everyone favoured their use. Godfrey's Cordial, for example, was referred to as "pernicious quackery" in The Visitor, or Monthly Instructor, for 1838. And there were many physicians who opposed the use of opiates. As early as 1840, Dr Anthony Todd Thomson, at a meeting of the Westminster Medical Society, told his colleagues that he

had no doubt that consuming opium, either in the crude or liquid state, or inhaling it from a pipe, tended materially to shorten life.

Not that such warnings were heeded. Opium and tinctures of the drug were readily available and inexpensive and, as one writer to The Daily News of 23 June 1879, commented, he was astonished at the widespread use of opium to keep children from getting cross. He went on to point to the "infinite detriment" to children of the extensive use of "opium, soothing syrups, and other baneful cordials ... by large masses of the mothers among our labouring population."

So, what can we make of this? I think there are three conclusions that might be drawn. First, the smoking of opium was seen as a vice practiced by orientals. The constant reiteration of this in both works of fiction and popular journalism suggests a clear level of xenophobic content. Second the misuse of laudanum appears to have been largely associated, in the public mind, with its use amongst the lower and labouring classes. Finally, it tends to reinforce the view implicit in so many elements of Victorian life that those in the better classes might engage in the same practices without them being considered vices unless and until they were carried to extreme excess.