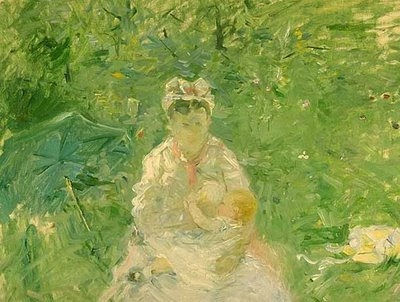 Morisot, The Wet Nurse (1880)
In recent years there appears to have been a resurgence in "cross-feeding," the practice of breast feeding of infants by other members of the family than the mother. Although often differentiated from "wet nursing," where the nurse was an outsider hired to breast feed, the principle of using the non-maternal breast is much the same. There is no question that wet nursing has been widely practiced in a great many cultures including Victorian England. In 1863, The Medical Times and Gazette, noted that in cases where it was inadvisable to give the child the breast, "amongst the higher classes who can afford to have a wet nurse, a good one should at once be procured." It went on to caution, however, that "amongst the lower orders the child should be fed, in great part, 'upon the bottle,'" even though this was not as satisfactory a method as wet-nursing but certainly "much more desirable than the exclusive use of the deteriorated milk of the mother."

Two major issues surrounded the question of wet-nursing. First, was whether or not it was desirable, in a general sense. when the mother was capable of breast feeding and, second, the question of safety; was the milk from a wet nurse, often unknown to the family, safe. A number of other issues were raised during the century, many of which revolved around questions of social class behaviour. For if one believed that the lower and labouring classes were unclean, immoral and animalistic one had to ask why a healthy woman capable of breast feeding, would turn to a wet nurse.

Assuming the need or desire for a wet nurse, the safest way to acquire such an employee was through a Lying-in Hospital. The Times regularly carried advertisements. Typically, Queen Charlotte's Lying-in Hospital advertised in March of 1888 that "wet nurses [could be] promptly supplied on application to the Matron," and the General Lying-in Hospital in York road, Lambeth advertised in the last year of the century, on 4 September, that "Wet Nurses ... can always be obtained on application to the Matron." In addition wet-nurses were sometimes available through the workhouses. According to The Times of 15 October 1836, in some workhouses, when a woman was admitted and gave birth, the parish officers would, after the birth, recommend them "as wet nurse, which is their usual mode of providing for unfortunate persons of this kind."

One of the foremost critics of the system of wet-nursing in the middle years of the nineteenth century was the Rev. Sydney Godolphin Osborne described in the Dictionary of National Biography as "a militant and controversial philanthropist." A frequent writer to The Times, he was well known under his signature, S.G.O. and held the living at Durweston in Dorset. On 4 September 1852, his letter "the Wet-Nurse System," was published in The Times. In it he attacked the wet-nursing system on the grounds that it was destructive of the lives of the children of the wet-nurses. He quoted the registrar of the rectory sub-district of Marylebone who, in his return to the Registrar-General, pointed out that in the month of August he "registered the deaths of 19 children under one year old," and then went on to write that most of them were "brought up by hand" and amongst the number "some of them were illegitimate."

The mothers obtain situations as wet-nurses, and their own offspring are left without any one to take proper charge of them. The food given is often improper, and it is irregularly administered. Usually in about four or five months death occurs, literally and truly for the want of nature's own nutriment--breast milk.

The deaths of the infants born to women who became wet nurses were not always simply a lack of care or nutrition. There was always the suspicion that it might have a secondary monetary rationale. An article in The Times of 18 January 1849, dealing with Burial Clubs, reports stories about wet nurses enrolling their own children in multiple burial societies in order to profit from deaths brought on by illness and lack of nutrition while their mother wet nursed another woman's child. Worse still were those cases where a wet nurse would enrol the nursing infant in one or more burial societies.

Of great concern, too, was the question of the transmission of disease, and particularly venereal disease from the wet-nurse to the baby. As it was not uncommon for a wet nurse to be the mother of an illegitimate child, there were constant questions about their morality. In the 1860s, when the treatment of the disease was still a subject of much speculation, The Medical Times and Gazette, explored the possibility of the communication of syphilis from a wet-nurse to an infant. What seems to have been overlooked, however, was the possibility of the transmission of syphilis from a baby to a wet nurse. David Kertzer, in Amalia's Tale, writes about the legal fight of an Italian peasant woman for justice after she contracted the disease from a baby she was wet nursing. Although she won the case, during the years in which it was fought, Amalia Bagnacavalli lost her own little girl to syphilis, her husband contracted the disease and her pregnancies ended with the death of the newborn either at birth or shortly thereafter. One cannot help but wonder how frequently this pathetic tale was repeated in England in the nineteenth century.

Moralists often concerned themselves with the notion that a wet nurse, having borne an illegitimate child, was living in the lap of luxury. A Mr H Turner, a chemist, writing in The British Journal of Homoeopathy in 1857, summed up the prevailing attitude when he described the wet nurse as one

who generally turns out a nuisance in the house, barely endurable. If the nurse has lost her own child of nearly the same age as the one she is engaged to suckle, her health good, and all parties satisfied, then nothing can be said against the arrangement; but if her own offspring is living, and if it has to be taken from her, and deprived of its own proper nourishment, an unnatural and cruel wrong is inflicted on the poor helpless and innocent sufferer; and if, as is often the case, the selected nurse is a mother but not a wife, the encouragement to immorality is so direct and positive, as to be shrunk from by all right minded persons, and vice is rewarded with a good home, good living, and little or no work.

It is a view echoed by the Rev. Sydney Godolphin Osborne when he said he did "not know which to rate highest, the cruelty or the immorality to which the wet-nurse system offers so liberal a premium."

Even Mrs Beeton who is more than fair-minded and balanced in dealing with wet nurses expresses her concern that there are always those amongst them who "are too often both selfish and sensual, performing, without further interest than is consistent with their own advantage, the routine of customary duties."(1) Mrs Beeton then goes on to describe at some length what a prospective employer should look for in selecting a wet nurse. And, once selected, it was necessary, according to Mrs Beeton, to watch the wet nurse like a hawk.

There are two points all mothers, who are obliged to employ wet-nurses, should remember, and be on their guard against. The first is, never to allow a nurse to give medicine to the infant on her own authority: many have such an infatuated idea of the healing excellence of castor-oil, that they would administer a dose of this disgusting grease twice a week, and think they had done a meritorious service to the child. The next point is, to watch carefully, lest, to insure a night’s sleep for herself, she does not dose the infant with Godfrey’s cordial, syrup of poppies, or some narcotic potion, to insure tranquillity to the one and give the opportunity of sleep to the other. The fact that scores of nurses keep secret bottles of these deadly syrups, for the purpose of stilling their charges, is notorious; and that many use them to a fearful extent, is sufficiently patent to all.

Such concerns seemed not to bother those who, for whatever reason, used wet nurses; and those who chose to do so were amongst the highest in the land. Certainly Queen Victoria did not breastfeed her children. An 1858 Anecdotal Memoir of the Princess Royal, justifies this decision on grounds of the Monarch's busy schedule.

State duties and Court requirements ... did not permit one in so exalted a position as Her Majesty to devote herself to this delightful task, at least with that unremitting attention which the health of the babe rendered necessary, and therefore, though deeply to Her Majesty's regret, a wet nurse was appointed.

Just how dissapointed Victoria was is, of course, open to speculation since apparently she chose not to breast feed any of her children. What was good enough, however, for the Monarch was certainly good enough for her subjects and wet nursing continued all through Victoria's reign and beyond.