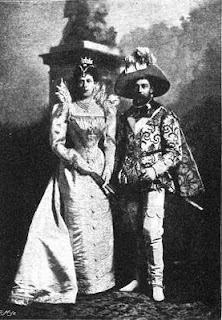 The Duke and Duchess of York at
the Duchess of Devonshire's Ball
In any analysis of England it is important to have some idea of the structure of the society.  In the Victorian years, although there was an ever-increasing fluidity to society, it still retained a great deal of the pattern that had emerged over the previous centuries. The upper-most classes consisted largely of the aristocracy and what is sometimes referred to as the "squirearchy."  Although "Squire" was not an official title, it was commonly used to identify the wealthy landowners who were not part of the Aristocracy.  The Aristocracy was made up of the royal family and the lords temporal and ecclesiastical. At the very top of the "Beehive" was the Queen and her Consort.

Following on from the excesses of her predecessors, Victoria made the Court and the Royal Family more respectable than it had ever been before.  Her entire style was such as to define her as a "middle-class" monarch. It was, however, not so much that she was middle-class; clearly she was not, but that she appealed to the constantly growing middle-classes; reflecting their values and morality. Despite the middle-class virtues reflected by the Royal Family, the aristocracy still held sway throughout the nineteenth century.  Few, if any, in the upper-class worked and  Income came from inherited land and investments.

As late as the 1880s, more than half the members of the House of Commons came from the upper classes and, of course, the entire House of Lords.  Many owned multiple establishments and while the Duke of Devonshire (the Harty-Tarty who had been involved with the lovely Skittles) was certainly at the top of the social tree with his wife, the double Duchess (Duchess of Manchester in her first marriage and Duchess of Devonshire in her second), they were not unusual.  For them, the year revolved around a number of locations. The extravagance of their lives is difficult to appreciate.

According to the younger sister of the present Duke,

Each year they spent time in at least five different houses.  From the middle of July until 12 August they stayed at their seaside home, Compton Place in Eastbourne.  Then they moved up to Bolton Abbey in Yorkshire for the grouse shooting, where they remained until the middle of September.  The winter months were spent at Chatsworth in Derbyshire, where they entertained for shooting parties and for Christmas.  The extravagance of these entertainments was, even for those days, great.  Turtles, destined for soup, were sent up from London three times a week at a cost of 24 pounds each, sometimes only to be thrown away unused.  A Derbyshire farmer on being told the price of these reptiles exclaimed, "I'm darned if that dead shell fish isn't worth as much as my dead cow!" Because there was always so much food left over, anyone who worked at Chatsworth by the day was allowed to take away enough food for his supper.  This practice eventually had to be stopped, as non-workers from far and wide came for a free meal, and one man was seen removing wheelbarrows full of food.

In the early spring the Devonshires went to Lismore Castle in County Waterford, where their time was spent salmon fishing on the Blackwater River.  By the middle of April it was time to pack up and move to Devonshire House in London for the season, which got under way at the beginning of May.

The social life of the upper classes revolved, very much, around itself and a rather predictable set of activities.  There was, first and foremost of course, "The Season."  While the upper class often had a full and active social life in the country, it was in the three months that they generally spent in London that the most splendid and expensive entertainment was available. "The Season" was a period of conspicuous consumption and something that only the wealthy or well-placed could afford.  For the men it might be a time of work or an opportunity to retreat to their city clubs, but for the women it was the highpoint of the social year.  And the highest point of "The Season," was a young woman's "coming out."  It was this presentation at Court that provided the passport to all of the activities of "The Season."

Preparation for presentation was hectic and strenuous.  All of the details as to what one could and could not wear, what one was to do and not do, learning the deep court curtsy and how to back gracefully out of the monarch's presence were all skills to be acquired before one's "coming out."

And then there were the balls.  Costume balls were a feature of "The Season," and there were none as elaborate as that given by the Duchess of Devonshire on 2 July 1897.  It was the Jubilee year; the sixtieth year of Victoria's reign.  In that Indian Summer, Victoria ruled over almost one-quarter of the world and its population.  One of those attending the great ball wrote to the Pall Mall Gazette  on 6 July in rather effusive terms to describe the event.

Looking back on the glories of a short, thougfh exceptionally brilliant, season, the one ineffaceable memory where social functions are concertned will be magnificent fancy dress ball given by the Duchess of Devonshire.  Gracious Royalties, lovely women, handsome men were there and, best of all, an entente cordiale that caused the whole entertainment to be a complete and unparalled success.

Lady Violet Greville noted that in "a scene of unvarying gaiety and brilliance," everybody who was anybody, "jostled and moved."

But the golden years were drawing to a close.  New powers were beginning to flex their muscles and there may have been a certain hectic excitement a hint, perhaps of hysteria, which heralded the years to come.
Posted by Dr Bruce Rosen at Tuesday, June 08, 2010 8 comments: