Valentine's Day is now one of the best known and most popular celebrations in the world.  Although not a "holiday" in most places where businesses are open as usual, it is widely celebrated with the exchanging of cards and the sending of gifts.

By the middle years of the nineteenth century, Valentine's day had become a popular event in Great Britain.  Two factors, I believe, contributed to its ever increasing popularity.  With the coming of the Penny Post,  From January of 1840, it was possible to send a letter throughout the United Kingdom for one penny.  This meant that there was a safe, speedy and, most significantly, cheap means of sending messages.  Early Valentine's day sentiments were often nothing more than a sheet of paper, possibly decorated, on which a sentiment was written.  Folded over it was inexpensive to make and to mail.  This, when combined with the frequency of deliveries of mail as the century progressed, meant that a card sent in London in the early hours might easily be delivered to another London address the same day.

The second factor which helped to increase the popularity of the day was the growth of commercialism around it. By the middle years of the nineteenth century the Valentine's day tradition of sending cards was becoming well established much to the delight of the purveyors of such cards. One of the best known of the stationers who helped to commercialise the day was Marcus Ward and Company. Specialising in stationery and general publishing, the firm won a medal for their colour lithography in the Great Exhibition of 1851. By the 1860s, the firm had firmly marked its place as a mass producer of calendars and greeting cards employing the likes of Kate Greenaway and Walter Crane to illustrate their cards. Below is an advertisement from the Illustrated London News of 8 February 1879.

Paper lace, developed in the 1830s, along with a variety of books and pamphlets containing appropriate sentiments to be used in creating one's own card, along with those cards purchased from outlets such as Marcus Ward, undoubtedly contributed to the mid-century avalanche of February mail.

A series of drawings which appeared in The Illustrated London News on the 13th of February 1886 seemed to summarise the day.  Here, a young man goes to the stationers to get a card for his beloved who, unfortunately, shares her name with a maiden aunt living at the same address. The outcome is inevitable, confusion reigns, the matter is finally resolved and true love, in the end,conquers all.

In the same year, George Du Maurier commented in one of his Punch cartoons about the New Woman and Valentine's day.  Two Girton ladies are looking at a card (one of them is holding a cigarette).  Clearly the inside contains the quote in Greek. First young lady, "Charming, isn't it? Gussie must have sent it from Oxford?" Second young lady (overlooking). "Yes, it's out of the Antigone - The Love-Chorus, you know. How much jollier than those silly English verses fellows used to send!" 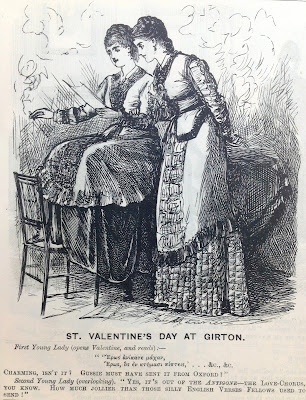 Valentines were exchanged in both serious and humorous modes.  In 1889, for example, thirty year old Miss Maud Berkeley confided to her diary

"Mr Barnes is my Valentine this year.  I presented him with a card, covered in pressed violets with the injunction that he should give me anything I wanted all year. He did not seem to rate this treat as high as he might, and retreated into his library, muttering that he had vestry service to think of."

For many, it was a day for remembering friends with small gifts.  The following year, Maud notes that she "Got the prettiest little brooch -- bog oak with pearls -- from Lilian.  Sweet little Nannie gave me a sovereign ... Mr Barnes very pleased with the card I made him."

On the other hand, beyond the charming, there were what are sometimes referred to as "vinegar Valentines."  These, at their mildest, poke fun at the recipient while at their worst can be quite insulting and very nasty. To see a selection of such cards, click here.
Posted by Dr Bruce Rosen at Friday, February 15, 2013 No comments: