One thing that commentators, both domestic and foreign, noticed in Victorian London was the smell. To put it in the simplest possible terms, London was "on the nose."

As the city expanded and industrialized, tenements spring up to meet the housing requirements of the factory workers and their families. Older buildings were turned into flats which were then subdivided into even smaller flats. Rents were high, often requiring several families to share accommodation even forcing large families into one room. Landlords cared little about the conditions of their tenants knowing that they could always fill vacancies and, in the process, raise the rent still higher. The conditions under which the poor lived were appalling. Bathing facilities were minimal and often a family's only access to water was through a communal pump which might only operate for several hours in the day.

Of course, as the population of London increased, suburbs became increasingly distant from the heart of the city. In order to move from one part of London to another, one could walk, go by train or rely, in some form, on horse power. Coal burning trains and a coal fired economy filled the air with soot. Horse power, too, created by-products, the primary one of which was manure. Tons of this muck dropped into the streets daily. One estimate has it at 100 tons daily. So much manure, often decomposing, meant that its smell pervaded London. Most streets had crossing sweepers who, for a small gratuity, would precede a person wishing to cross a street, sweeping the muck aside in order to make a relatively clear crossing.

London stank of unwashed bodies, raw sewage, coal fires and horse manure. And most of all, it stank of the Thames, for the Thames was, particularly in the early years of Victoria’s reign, the great sewer of London. The problem reached its apex in 1858, the year of the Great Stink. The smell off the river was so intense that members of Parliament avoided sessions and wandered around the building with handkerchiefs held over their noses. In an attempt to ameliorate the stench, curtains impregnated with chemicals were hung over the windows. 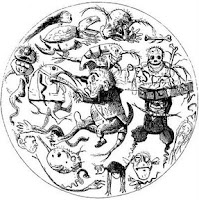 Surely, nobody could have been surprised at the Great Stink. Eight years earlier, Punch had published a picture of what it imagined a drop of water from the Thames would have looked like under the microscope. (Click on the picture to enlarge it.)

A number of factors combined to make what was normally unpleasant, appalling. In part the problem was exacerbated by a very warm summer. The increased population meant an increase in human waste to be disposed of. While the flush toilet or water closet was a great step forward in public hygiene, they discharged into the old cesspits which were meant only to collect rainwater and discharge it into ditches and streams that eventually found their way to the Thames. Increasingly it was human waste that was finding its way into the Thames along with the byproducts of those industries which, needing water, lined areas of the river and discharged their noxious wastes into the water.

As if the stench of the city and particularly of the Thames was not enough, many of the open sewers drained into the river at low tide. The results of this led one writer to comment that “the results are better imagined than described.” At the same time, a significant amount of the drinking water in the Metropolis came from the Thames; often well below the point at which raw sewage entered the system. On 8 July 1858, a Report to the City Sewers Commissioners by the Medical Officer of Health, Dr Letheby, noted that the Thames had assumed “an appearance and [appeared] to undergo a change which has never before been witnessed.” He went on to characterize the odour of the river as,

a stinking vapour, which is in the highest degree offensive, and which inhaled produces slight headache, giddiness, and nausea. The water at midstream is charged with the higher forms of animal and vegetable infusorial life, but at the shore is so lethal in its qualities that nothing exists in it but the lowest forms of fungi and the simplest of living creatures.

Those travelling on the river often remarked on its smell. George Godwin went to Lambeth via one of the many boats plying the great waterway, a “Thames omnibus.” He eventually alighted “to escape the fearful odour which was floating over the water from the mouths of the sewers opened by the retiring tide.” Godwin went on to describe an area around Lincoln-inn-fields with six slaughter-houses, a large tripe-boiler “the effluvium from which is very bad,” and stables. In one house water was coming in.

There is one cask capable of holding about fifty gallons, another a little more. There is no tap in these casks, so each person is obliged to dip vessels, however dirty, into the water. This supply is for three small houses, containing five families of from five to six persons each: this number the people allow, but some of them being Irish, it is probable that they have lodgers. The people do not like to drink the water from the casks.
. . .
This dwelling-place has two slaughter-houses at the back, a closet close to the water, a dust-heap, and an open gully-hole in front. The smell of this place is shocking.
We went at random into a house in Sheppard-street, close by. The drain is stopped: the smell, even before passing the threshold, is frightful. … So bad was this place, that we were glad to rush out into the somewhat purer air.

And while Godwin was able to remove himself from the stink of London, all too many of its residents were not able to do so, living with it continuously.

For more information on London and the effect of its air and water, click here to read Stephen Halliday's 2001 article in the British Medical Journal, Death and Miasma in Victorian London: An Obstinate Belief.
Posted by Dr Bruce Rosen at Friday, September 21, 2007

Excellent blog, thanks for posting