The Greatest Show on Earth - And all for a Shilling 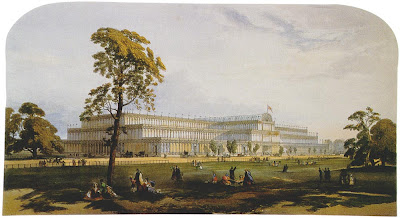 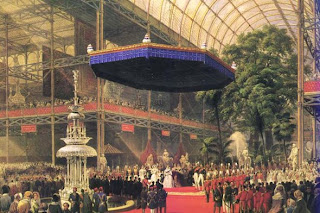 On a cloudy and mildly threatening first day of May in 1851, Queen Victoria arrived at the Great Exhibition to a tumultuous welcome. Attired in a dress of pink watered silk, brocaded with silver and decorated with pink and blonde ribbons ornamented with diamonds, she wore a head dress of diamonds and feathers and on her arm, the Order of the Garter. Her entrance to the building was marked with a flourish of trumpets while those in the audience waved hats and handkerchiefs. In the words of The Times, the "whole scene presented was one of unusual splendour."

The Report of the Proceedings of the Royal Commission was read, in part, and presented to her Majesty by His Royal Highness, Prince Albert. The Queen responded enthusiastically, expressing her "greatest satisfaction, " and noting that she had
"observed with a warm and increasing interest the progress of your proceedings in the execution of the duties intrusted to you by the Royal Commission." She went on, not surprisingly, to express her "sincere gratification to witness the successful result of your judicious and unremitting exertions in the splended spectacle by which I am this day surrounded."

Butr what else could the Queen say? This was the great triumph of her beloved Albert's efforts. it was new, it was exciting. Writing to her uncle Leopold, King of the Belgians, on 3 May, she described her feelings and emotions. It was, she told him, the "greatest day in our history, the most beautiful and imposing and touching spectacle ever seen and the triumph of my beloved Albert." It was, she goes on to say, "the happiest, proudest day in my life."

Despite waxing ecstatic over Albert's contribution, she managed a few snide digs at his detractors.

Albert's dearest name is immortalised with this great conception, his own, and my own dear country showed she was worthy of it. The triumph is immense, for up to the last hour the difficulties, the opposition, and the ill-natured attempts to annoy and frighten, of a certain set of fashionables and Protectionists, were immense; but Albert's temper, patience, firmness, and energy surmounted all, and the feeeling is universal. You will be astounded at this great work when you see it! The beauty of the building and the vastness of it all, I can never thank God enough. I feel so happy, so proud.

In the six months that the Great Exhibition ran, Victoria visited it frequently. But so too did many of the great and fashionable. Charlotte Bronte visited it five times. Writing to her father on 30 May, she described her attendance at a lecture by Thackery and then went on to describe her first impressions of the Exhibition, and particularly the "look" of the Crystal Palace.

The exterior has a strange and elegant but somewhat unsubstantial effect. The interior is like a mighty Vanity Fair. The brightest colours blaze on all sides; and were of all kinds, from diamonds to spinning jennies and printing presses, are there to be seen. It was very fine, gorgeous, animated, bewildering.

Nonetheless, she went on to tell her father that she "liked Thackeray's lecture better." But as time wore on and visit followed visit, she became more enamoured of the Great Exhibition. In a later letter, Charlotte wrote to her father, "I must say I was more struck with it on this occasion than at my first visit. It is a wonderful place - vast, strange, new and impossible to describe. ...It may be called a bazaar or a fair, but it is such a bazaar or fair as Eastern genii might have created."

Not everyone was enthralled with the amazing glass structure. Pugin called it "a glass monster" and advised Paxton to limit his building to greenhouses. Ruskin complained that its contents were trivial and Thomas Carlyle compared it to a "big glass soap bubble." 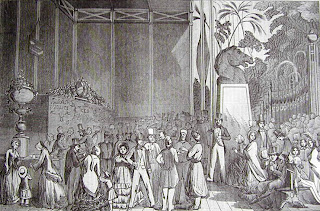 During the 141 days that the Exhibition was open to the public, it played host to six million visitors. Once it ended, London would never be the same again. Consider, for example, one small businessman in Knightsbridge, not far from the site of the Crystal Palace. A wholesale grocer from Stepney took over a small shop hoping to cash in on the Great Exhibition. And "cash in" he did. Charles Harrod built his shop into a thriving retail business which by 1880 had over 100 employees. Another fortune was made by Schweppes which sold 85,000 dozen bottles of soda water, almost one-half of its sales for the year, at the Great Exhibition. This was in addition to the half-ton of tea and six tons of coffee they provided to service two refreshment courts (such as the one on the left) for which they were suppliers.

Of those who visited the Great Exhibition, the great majority were British and had come from every place in the British Isles to view the Crystal Palace. For many, it was the first time they had come to London and the cost, both in money and time was to make it a once-in-a-lifetime experience. Special trains brought visitors from all over the country. Thomas Cook ran tours from Yorkshire and the Midlands and in the the short period of the Exhibition he carried more than 150,000 excursionists to London and back. Indeed, so significant was the business that he even promoted his tours with a newspaper, Cook's Exhibition Herald and Excursion Advertiser. it was a unique and fascinating experience for the visitors to see the wonders of the world gathered in the great glass and iron building which seemed so to dominate Hyde Park. But if what was inside the building fascinated, it was the structure itself that captured the imagination. Not only was it one of the most incredible construction projects ever undertaken, it required the development of new methods of construction and it 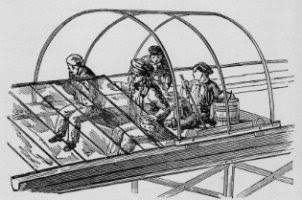 contributed to, if it did not create, the process of mass production of interchangeable parts. Just one example of the new technology that was required can be seen on the left, a sled pulled along the guttering in order to expedite the insertion of the glass panes into the building. The building was never meant to be more than a temporary structure, yet it became one of the architectural wonders of the nineteenth century; an example of what could be done with iron and glass and imagination.

Despite the litany of complaints as the building was being erected, mostly from those who believed they should be profiting from it, the one criticism which can, fairly, be laid at the building’s feet was its lack of cohesion. Inside, the wonderful straight lines which captured the eye and drew it onward and upward were compromised by busy, rounded art works totally out of place; not to mention out of time. While the era demonstrated progress in power, architecture and construction in the sciences, the arts languished. there was too much of too little and that "little" was all too often the fancy doo-dads so popular in the age of ornamentation. It was as if anybody who thought they had something to exhibit could show it at the Great Exhibition. John Lienhard, of the University of Houston summed it up.

The power of the exhibition lay in the engineering of the building. Victorian art and design lumbered on, ponderous, off-the-wall, and slightly claustrophobic. It was Victorian engineering that laqy its hold on our imaginations. The simple truth was that engineering was the major art of the middle 19th century. The Crystal Palace itself, not its contents, was the art here.

In the end, the Great Exhibition ended more with a whimper than a bang. For almost a year after the Exhibition closed, the building remained with nobody quite sure what should be done with it. It had, after all, been meant as a temporary structure. It had served its purpose and now it was time for it to go - or so Prince Albert thought. Finally, on 29 April 1852, the House of Commons agreed. The building had to be torn down or removed. In just over a fortnight a company was formed and the public was invited to subscribe to a plan to move the great building to Sydenham Hill in Norwood, just south of London. In what must have been one of the most monumental moves of all time, the building was taken down glass pane by glass pane, column by column, and moved by horse and dray to its new location. 400 tons of glass and 4,000 tons of iron were dragged up the hill by horse and cart. A 15 ton, 50 year old palm tree was purchased along with an enormous amount of greenery to go into the reconstructed building and the three-storey tall palm tree was dragged up Sydenham Hill on a special wide-wheeled transporter pulled by 32 horses. And so it stood, the new Crystal Palace, larger than the one in Hyde Park. It was to remain an outstanding landmark until 1936 when it burned down.

To view or download The Industry of Nations as Exemplified in The Great Exhibition of 1851, click here.
Posted by Dr Bruce Rosen at Wednesday, July 30, 2008

Hi! I enjoy your blog a lot, I added it to my blogroll!