If the Victorian era is sometimes referred to as "the age of steam," it might equally well be called "the age of mail."  It was during Victoria's long reign that the transportation of correspondence was simplified and costs were reduced to such an extent that almost anyone could afford to send a letter within Great Britain while the cost of a letter to the colonies was within the reach of  many.  William Lewins, writing in 1864, makes the point that

In the Post-Office, towards 1838 and 1839, the influence of railways promised soon to be paramount, and it was now that Acts were passed in Parliament “to provide for the conveyance of mails by railways.”

In August 1838, shortly after Victoria came to the throne, the existing charge for a letter going less than eight miles was 2d., having only recently been halved from 4d.   Other than that, the rates for postage had not changed since 1812 in Great Britain and since 1814 in Ireland.

The cost of correspondence was generally borne by the recipients and this could prove a significant impost.  Tradesmen in the latter years of the eighteenth and the early years of the nineteenth century sent out their pamphlets even as they do today, but the difference was that once again it was the addressee who paid for the privilege of receiving the advertisements.  Rowland Hill, the man responsible for the Penny Post tells us that

... every day that brought post-letters brought also a demand for payment, the postman waiting at the door till he had received his money.  … when we were most straitened in means, his rap was not always welcome; the demand being certain and sometimes inconvenient; the recompense, in the way of news, doubtful.  Tradesmen's circulars, in particular, which sometimes came from a considerable distance, and always unpaid, were great causes of disappointment and irritation.

Before the introduction of the Penny Post, a one page letter from London to Birmingham would cost 9d.  An enclosure – even of an additional page – would double the cost and a three page letter would bring the charge to two shillings threepence. Clearly it was to the advantage of many businesses to evade the high price of postage and this was a common practice despite both its illegality and the substantial fines that it might attract.  Avoidance was costly to the Post Office.  According to Lewins, “Penal laws were set at defiance, and the number of contraband letters became enormous.”

Matthew Devonport Hill, the brother of Rowland Hill tells how,

On one occasion the agents of the Post-Office made a seizure, ... of eleven hundred ... letters, which were found in a single bag in the warehouse of certain eminent London carriers.  The head of the firm hastened to seek an interview with the Postmaster-General, and proffered instant payment of 500l. by way of composition for the penalties incurred and if proceedings against the firm might not be instituted.  The money was taken, and the letters were all passed through the Post-Office the same night.

The postal service, like any organism, grew and changed over time.  But the greatest change was undoubtedly the introduction of the Penny Post, which made the mail service cheaper and, as a result of increased volume, more efficient.  While there was always talk of reform, it was Rowland Hill’s pamphlet of 1837, Post Office Reform; Its Importance and Practicability, that provided the impetus for change. In the pamphlet he proposed that letters should be paid for by the sender at a uniform rate and 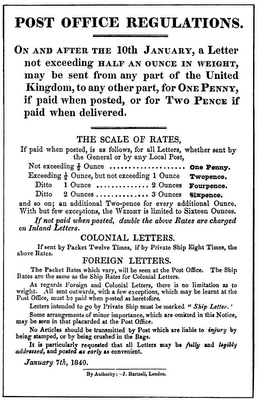 Three years after he first proposed changes to a governmental commission Parliament passed an Act which enabled many of the reforms Hill had proposed including the use of stamps as we know them today.  While the first of these was neither preforated or gummed, the Penny Black is unmistakable as a postage stamp. 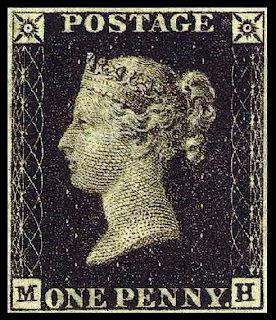 The Penny Black
As a result of the 1840 reforms, not only was the delivery of mail faster, more frequent and more reliable than it had been in earlier times, the care which was exercised could have stood as a sterling example of British thoroughness.  When, for example, Mr David Clarke of Liverpool, complained to the Colonial Secretary, Earl Grey, that letters he had sent to his family in Melbourne had not been received, Grey immediately sent a dispatch along with copies of the correspondence from Clarke to Governor Sir Charles Fitzroy in Sydney.  Fitzroy, in turn, requested that the Superintendent of Port Phillip, soon to become the Colony of Victoria,  investigate the matter.  This was done and La Trobe wrote back to Deas Thomson, the Colonial Secretary, that he had

caused enquiry to be made into this complaint, and beg to state that the Chief Postmaster reports that, search having been made, three letters have been found in the Post Office Melbourne addressed to Miss Clarke … directed to be left at the Post Office Melbourne until called for;- that no one having called for them, they were advertised in the usual course as unclaimed letters. - Had Mr. Clark in the first instance directed these letters to the care of Dr. Martin, in whose family he was aware his daughter was residing, there would have been no difficulty in delivering them. … Miss Clarke's address being now known steps will be immediately taken to deliver them to her.

Of course, it is worth noting that the whole process took a year but that was a function of the “tyranny of distance,” rather than any lack of zeal on the part of the authorities.  It would certainly be fair to say that by the middle years of the century, the Royal Mail had come of age!
Posted by Dr Bruce Rosen at Wednesday, May 19, 2010

And what's more the post worked. It was possible to post a card in the morning and expect it to arrive by the afternoon. The Postal Museum in Bath is fascinating by the way.

It goes to show, you cannot trust advertisers... not in the mid 19th century and not now!

The 1840 reforms must have been really impressive: the delivery of faster, more frequent and more reliable mail was no mean feat. Then heaps of other impressive thinking followed at the same time eg the first post boxes were erected in Jersey in 1852. Love it.

Fascinating stuff - it's amazing to think how crap our postal system is today compared to how efficient it was in Victorian times.