Amost anyone who has ever stepped into a kitchen has heard of Mrs Beeton's Book of Household Management and, everyone who has heard of the book probably has an image of Mrs. Beeton.  So, what does her name conjure up?  For many she is a plump matronly woman of indefinable age, but somewhere between 40 and 65.  She is wearing an apron and has flour both on it and on a few places on her face.  "Jolly", one might think, would be a useful word to describe her.

Well, prepare to be disillusioned.  Isabella Beeton (nee Mayson was born on 12 March 1836, the first of four children.  When her father died her mother remarried a widower with four children of his own.  The pair went on to have an additional thirteen children. Isabella was the oldest girl amongst the twenty-one children.

On a visit to London, Isabella met the publisher, Samuel Beeton, whom she married in July of 1856.  She was twenty and he was five years older.  Four years earlier, Sam had set up as a publisher and in 1852 he published Harriet Beecher Stowe's Uncle Tom's Cabin.  It was an immediate success and Sam's publishing career was made.

Margaret Beetham has noted that Sam showed a "combination of energy, financial shrewdness, and faith in popular print as a medium for social improvement;" elements which were to "characterize his career."  In 1852, he started publication of the English Woman's Domestic Magazine a monthly journal costing twopence which was to become the progenitor of the middle-class woman's magazine.

In the year following their marriage, the couple lost their first child.  Born in May of 1857, he died at the age of three months.  Just over two years later a second son was born and was christened Samuel Orchart - after his father and with the same name as the first child.  This child was to die on New Years eve, 1861, at the age of two years. The couple were to have two additional sons, Orchart who was born exactly two years after the death of the second child, on New Years Eve 1863 and Mayson two years later in January 1865. Isabella contracted the great scourge of childbirth, puerperal fever and died a week later, aged 28. 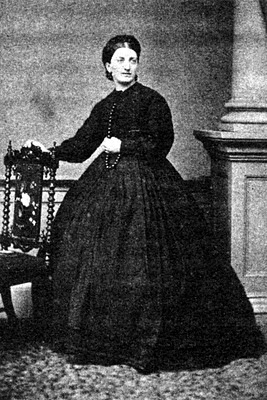 How was it, then, that Isabella Beeton was to become the original "Domestic Goddess"?  With a publisher husband responsible for the English Woman's Domestic Magazine, it would have been strange indeed, if an intelligent wife would not have been interested in her husband's business.  Whatever else Isabella may have been, she was not a fool.  For her and for Sam, business was an important part of their life together.  Kathryn Hughes, writing in The Times in 2005, described Mrs Beeton as "no domestic expert but a canny women’s magazine journalist who saw 'domesticity' as a subject ripe for repackaging."

It was not long before Mrs Beeton was writing on domestic matters for Sam's magazines.  Although she made significant contributions to the business, she is best remembered for her Book of Household Management.  The book itself is not merely a cookbook or a book of recipes. It is, as well, a book of exactly what the title claims, "Household Management." Between 1859 and 1861 it was published as a monthly supplement to The Englishwoman’s Domestic Magazine and In October 1861, it appeared as a single, illustrated volume of 1,112 pages.

Open the book to the first page of text and you will find, quite clearly, that the book is addressed to the mistress of a house.

I. AS WITH THE COMMANDER OF AN ARMY, or the leader of any enterprise, so is it with the mistress of a house. Her spirit will be seen through the whole establishment; and just in proportion as she performs her duties intelligently and thoroughly, so will her domestics follow in her path. Of all those acquirements, which more particularly belong to the feminine character, there are none which take a higher rank, in our estimation, than such as enter into a knowledge of household duties; for on these are perpetually dependent the happiness, comfort, and well-being of a family. In this opinion we are borne out by the author of "The Vicar of Wakefield," who says: "The modest virgin, the prudent wife, and the careful matron, are much more serviceable in life than petticoated philosophers, blustering heroines, or virago queens. She who makes her husband and her children happy, who reclaims the one from vice and trains up the other to virtue, is a much greater character than ladies described in romances, whose whole occupation is to murder mankind with shafts from their quiver, or their eyes."

The last 150 pages of Isabella's Magnum Opus  are concerned with matters relating to the house, including chapters on "Domestic Servants," "Rearing, Management, and Diseases of Infancy and Childhood," "The Doctor" and "Legal Memoranda."  But despite all of the very good advice, today the Book of Household Management is probably best known as a cookbook.  In its day it was quite innovative.  It set out the ingredients required in recipes and actually gave detailed instructions as to the cooking procedures and times.  Many of the recipes were not original having been taken from other works, but for the first time they were presented in an easy to understand format. And while it will undoubtedly come as something of a dissapointment to those who have been convinced that the phrase "first catch your hare" came from Mrs Beeton's recipe for Jugged Hare, such was not the case.  Here is the recipe of "Jugged Hare." 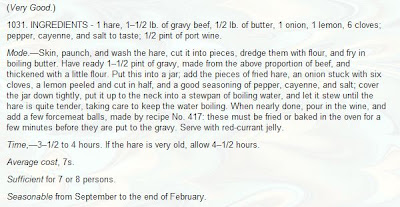 There are numerous copies and transcriptions of the book on the internet, but if you would like to see what the original looked like, click here. Unfortunately this is an incomplete and badly digitized copy.  A good transcription can be found by clicking here.
Posted by Dr Bruce Rosen at Wednesday, October 06, 2010

It's got rather a 'reputation' that I don't think is deserved. When I read it, I thought how useful it was.

It is a wonderful book, full of very useful information reflecting class attitudes and values; but apart from that, Isabella was a quite astonishing woman!

What a great post! I'm an archivist in an academic Special Collections that has a large culinary history collection with, not surprisingly, several titles by Isabella Beeton. (I also have a background in literature and a great love for the Victorians.) Given so much of what I encounter with our collection, it never occurred to me to picture her as anything but matronly! Shame on me and thanks for the eye-opener.

i really thought this was helpful for my CLP thank you