The Bridge Over the River Tay

Bridge Before the Disaster

Beautiful Railway Bridge of the Silv’ry Tay!
Alas! I am very sorry to say
That ninety lives have been taken away
On the last Sabbath day of 1879
Which will be remember’d for a very long time. 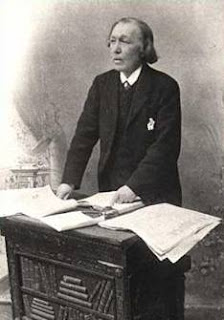 Almost everyone would be familiar with the work of William Topaz McGonagall (pictured on the right). And among the very worst of his appalling output was The Tay Bridge Disaster! But while we laugh at McGonagall, we need to remember that there was, indeed, a terrible catastrophe when the railway bridge over the river Tay collapsed in 1879. Opened in May of the year before, it was the first rail bridge to cross the river and, with a length of two miles, was the longest bridge in the world. A single rail track ran the length of the bridge and the first crossing, by train, was on 26 September 1877.

The bridge, designed and built by Civil Engineer Thomas Bouch, was officially opened at the end of May 1878 after having been inspected and approved for use by the Board of Trade. It had taken six years to build and of the 600 men who worked on it, 20 or just under three and one-half percent lost their lives during construction. The Times of 8 June, in a report from Edinburgh on the official opening, noted that "Fragile as its appearance is, however, there is no doubt of its thorough stability."

Just a year after its opening, on 20 June 1879, Queen Victoria crossed the bridge on her return to Windsor from Balmoral. The Royal train arrived at Tay-bridge Station at 6.00pm and after the usual ceremonial niceties, including the presentation of Mr and Mrs Bouch to Her Majesty,departed at 6.05, crossing the bridge at a reduced speed of fifteen miles per hour "to allow the Royal visitors to enjoy the magnificent view." On 24 June, only three days after the Queen's return to Windsor, a short notice appeared in The Times.

The Queen has been graciously pleased to confer the honour of knighthood upon Mr. Thomas Bouch, C.E., chief engineer and projector of the Tay Bridge.

Six months later, and only three days after Christmas, on the night of 28 December, a heavy gale swept over the Dundee area as the train from Edinburgh made its way toward the city. The train was due to arrive at 7.15 after crossing the Tay Bridge but while the train was still crossing the river, the bridge collapsed, taking the train into the water far below and an estimated 75 passengers to their death. No survivors were found and only 60 bodies were recovered. First reports to The Times, filed at midnight, reported:

It is believed that the train is in the water, but the gale is still so strong that a steamboat has not yet been able to reach the bridge.

The train had rolled onto the bridge at 7.14 and appeared to be progressing normally when "sudenly there was observed a flash of fire. The opinion was that the train left the rails and went over the bridge."

When it was found that telegraphic communication between the north and south ends of the bridge were broken, the station-master and the locomotive superintendent walked out onto the bridge despite the fierce gale. They saw a gap in the bridge and realized that the bridge was down in part although they initially believed the train had crossed over the broken area before it had given way. 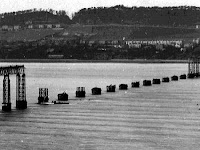 Reports continued to filter in through the night. By 1.30 in the morning there were thousands pf people at the Tay-bridge station and it was remembered that in October of 1877 during construction of the bridge, one of the girders was blown down during a gale and a workman had been killed. Two and a half hours later,it was reported that the portion of the bridge that had fallen into the river

consisted of several of the large superincumbent girders at the central and navigable portion of the river, which is on an average from 40ft. to 45ft. deep. The train would fal a distance of 88ft. before reaching the water. Some time elapsed before the nature of the accident was ascertained. Roberts, an official, walked along the bridge a certain distance, and then crawled till he came to the great chasm, when he was that the 13 girders had gone, and that nothing was left but the iron piers which had supported them. Smith, a station-master, went along in the same manner from the other end, and also saw that the girders had gone, thereby corroborating the statement of Roberts.

Initial estimates of the number of lives lost were as high as 300, although the final figure generally agreed upon was 75. As in the case of any great tragedy, all sorts of "experts" wrote to The Times to explain how and why the accident occurred. On 31 December, "The Thunderer" published letters from E. R. Robson, F.R.I.B.A., F.S.A., Architect to the School Board for London; J. D. Shakespear, The Scientific Club, Savile-row, W.; Charles B. King and a correspondent who signed himself as "Slow and Sure." Each pointed out deficiencies in the building of the bridge which would, accordingly, explain the accident. Another nine letters were published during the week, and then a few more as the initial shock wore off.

All that will ever be known of the terrible calamity at the Tay Bridge is probably known, and it is sadly little. The huge gap, some three thousand feet in length, in the structure, the broken or dismantled piers left standing in the stream, and the motley wreckage washed ashore from hour to hour are the only evidence of an unexampled calamity. No one clearly saw the disaster. none have escapeed to tell how it occurred. A trail of fire and a sudden shower of sparks seen for a moment from the shore were the sole signal made by the train as it shot with a multitude of human beings into the abyss below.

The Report of the Court of Inquiry ordered by the Board of Trade was issued on Saturday, 3 July 1880, just over six months after the accident. It noted imperfect workmanship and changes in the specifications that would, in general, have weakened the structure. Nonetheless, it pointed out that during the inspection in February of 1878, "six locomotives coupled together, each weighing 73 tons, [were caused] to pass over the bridge at a speed of 40 miles per hour." Everything seemed fine at the time although it was recommended that a maximum speed of 25 miles per hour should be set as a limit, "not to be exceeded." But perhaps the most interesting finding to come out of the Inquiry was the statement made at the time of the inspection that the Inspector, General Hutchinson, "should wish, if possible, to have an opportunity of 'observing the effects of a high wind when a train of carriages is running over the bridge.'" A number of weaknesses in the bridge were identified but in the end the Report found

That the fall of the bridge was occasioned by the insufficiency of the cross bracings and its fastenings to sustain the force of the gale on the night of December 28, 1879, and that the bridge had been previously strained by other gales.

Mr Rothery, the Wreck Commissioner issued a separate report in which he wrote,

I apprehend that, if we think that blame attaches to anyone for this casualty, it is our duty to say so, and to say to whom it applies. I do not understand my colleagues to differ from me in thinking that the chief blame for this casualty rests with Sir Thomas Bourch, but they consider that it is not for us to say so.

As a result of the Inquiry, Bouch was released from his job with the Edinburgh and Northern Railway and died in disgrace at the end of October 1880, his ill-health undoubtedly exacerbated by his vilification at the Inquiry.

An exhibition for the 125th anniversary of the disaster, containing original "news" sketches and much, much more can be found by clicking here.

Your comments about W. McGonogall are way out of order.

His output was not at all appalling and the Tay Bridge Disaster Poem is still recited to this day even by such emminents as Billy Connolly.

If the poem was so bad why is it still being recited today ?

You answer your own question. It continues to be read because it is so bad that it is funny. Remember, Billy Connolly is, after all, a comedian.