The Manly Art of Self Defence 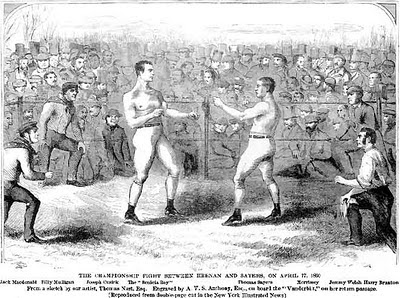 Heenan v. Sayers for the World Championship, April 1860.
Paralleling the efforts to remove executions from the public view were the attempts to make the staging of prize-fights more difficult.  During Victoria’s years on the throne, the ring undoubtedly claimed more lives than public executions, for it was not until the last decade or two of her reign that glove-fighting replaced bare-knuckles pugilism.

Unlike the main participant at a public hanging, for whom death was inevitable, for the pugilist it was only a possibility, an occupational hazard, and the supposed benefits which might be derived from success were often seen as outweighing the risks.

In the early years of the nineteenth century, fighting was a common sport.  Like most village sports, it was rough-and-tumble and could be practiced in a variety of forms.  Jem Mace, who was generally recognized as the World Heavyweight Champion in the early 1870s, in recalling his youth, pointed out that

neither cricket nor football existed then, in the sense they do now, nor had the gentlefolks taken up with polo or golf.  Consequently all the interest that is now spread over these, and other sports, was concentrated on boxing.

As well, the thin line between amateur and professional was virtually non-existent.

Everybody learned to use his fists in those days. … Every little village possessed its ‘champion,’ and these used to meet one another, usually on Sunday, and fight to the finish with naked fists.

Frequently such village matches consisted of nothing more than two young pugilists hammering away at each other until one was knocked insensible or was either unable or unwilling to continue.

More formal fights took place in a ring erected for the occasion with the full contingent of seconds, referees, umpires and others on hand.  But even such formal arrangements in no way detracted from the brutality of the spectacle.  The very fact that the participants might be better trained and capable of standing up to greater punishment often made professional fights bloodier than those between amateurs.

The skin of professional fighters was toughened with vigorous rough towellings and rubdowns with horsehair gloves.  Their hands were soaked daily with brine or some other concoction to toughen them and the mixtures were often applied to the face, chest and ribs as well.  Jem Mace’s hands were soaked in a brine composed in part of the green vitriol, copperas, mixed with whisky, gunpowder and horseradish, “until by degrees they were made as hard as iron and nearly as black.” His face received the same treatment and when he entered the ring the contrast between his blackened face and hands and the rest of his body was clearly visible.

Despite this toughening process, blood (commonly referred to by the cognoscenti as “claret”) was usually drawn early in the fight and, not infrequently, the match would degenerate into a virtual bloodbath. In the championship fight between John Camel Heenan, the American challenger, and Tom Sayers, in April of 1860, the latter drew blood in the first round and went on to so batter the American’s face that by the time the fight ended, Heenan, unable to see his opponent, hit one of the seconds in the face, knocking him down. Sayers, in the early rounds, had also been injured by a blow to his right arm and although the fight lasted a full thirty-seven rounds before the ring was broken, and an additional five thereafter, he never regained its use during the match.

After the Sayers-Heenan bout, the championship was declared open and the first successful claimant was Sam Hurst, a six foot, two inch, fifteen stone, Lancashire wrestler described by The Times as being of “almost superhuman strength, but perhaps the most unskilful boxer that ever entered the prize ring.” In June of 1861, he met Jem Mace who stood only five foot, eight inches and weighed ten and a half stone but was, in his day, considered “the most scientific pugilist alive.” By the end of the first round, which lasted almost twelve minutes, Hurst was bleeding freely and by the end of the fight, which lasted eight rounds and 50 minutes, both men were covered in Hurst’s blood and Mace’s blows had a “splashing sound like striking raw meat.”

The brutality of the prize ring appealed to that same type of person who attended public hangings. The Cornhill Magazine, in 1864, rather facetiously noted that

Hangings now occur so rarely, and at such irregular intervals, that they can no longer be depended upon as a source of amusement, and perhaps we are to some extent bound to make up for the deficiency by an enlightened policy with regard to prize-fights.

Certainly, many of those who expressed objections to prize fighting did so because it was expected of them and though the number of fights declined as the century wore on and the middle and upper classes began to abandon the sport, certain “distinguished spectators,” according to All the Year Round, “ … gave the Ring the sanction of their presence, but not the sanction of their names.”  But by the last decades of the Queen's reign, pugilism was in a parlous state.

However, as glove boxing increased in popularity in the ‘80s and ‘90s, more spectators were again seen from the better social classes and, it was not uncommon at a match to see “rows upon rows of spectators, all arrayed ‘in faultless evening garb.’”
Posted by Dr Bruce Rosen at Tuesday, May 25, 2010

Very good post - bread and circuses never really disappeared and bare knuckle boxing still is a 'sport' (albeit mainly underground) in the States.

an interesting oil portrait of a Black prize fighter named Jem Wharton has recently come to light. Dated 1837 it's by Liverpool artist William DAniels and shows Jem in 'sparring' garb. i.e. vest and longjohns and boxing gloves. anyone with any newspaper or other info on Wharton, please contact me

I am desirous of contacting 'Anonymous', who posted a comment about needing information on the black prize fighter called "Jem Wharton", following your 25th May 2010 blog, 'The Manly Art of Self Defence'. I am a prize ring historian and wish to inform him that there is a short chapter on Wharton in my recently republished book on the London prize ring, Up to Scratch. In addition I have information from newspapers which may interest him, and would also like to know more about the painting he mentioned.